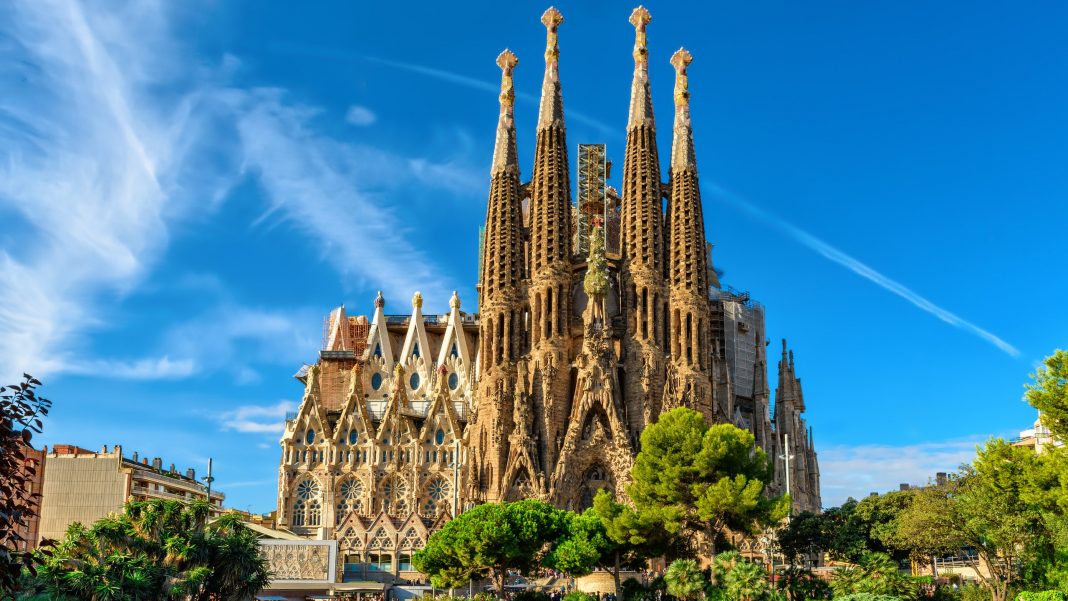 Sagrada Familia is a Roman Catholic church located in Barcelona, Catalonia. It was designed by Antoni Gaudi, a Catalan architect, and the construction of the church was started in the year 1882. The design is described as Spanish Late Gothic mixed with Catalan Modernism and Art Noveau.

It was a slow construction for the funds were from private donations and it was halted due to the Spanish Civil War. Sagrada Familia is a UNESCO World Heritage Site.

The Mosque de Cordoba is a Catholic Christian cathedral of the Diocese of Cordoba in Andalusia. It was built as a dedication to the Assumption of the Virgin Mary. It has been considered one of the best monuments based on Moorish architecture.

The columns of the cathedral were made from onyx, jasper, marble, and granite. There are beautiful mosaics and azulejos worth seeing.

Ibiza is an island located in the Mediterranean Sea, off the coast of Valencia, Spain. The island is popular for its legendary nightlife and electronic music. Tourists keep on coming during the summer for the great club experience during this time of the year.

There is also an underground music scene that tourists, who are creatively inclined, want to enjoy. Other areas of the Ibiza island are part of the UNESCO World Heritage Site.

The Royal Palace of Madrid is the official residence of the Spanish Royal Family. It is located in Madrid and is used for the purpose of state ceremonies. The Royal Family resides at the Palacio de la Zarzuela, on the outskirts of Madrid. The building is owned by the Spanish State and administered by the Patrimonio Nacional.

Some parts of the palace are open to the public with an admission fee. Experience the beauty of the Grand Staircase, Royal Library, Royal Pharmacy, Royal Armory, The Crown Room, and more.

The Alhambra is a palace and a fortress complex located in Granada, Andalusia in Spain and was built in 889 as a small fortress. It was later renovated during the 11th century by the Moorish Emir Mohammed Ben Al-Ahmarand gained a lot of attention. The Sultan of Granada, Yusuf I, made the Alhambra into a royal palace in 1333.

The palace is a UNESCO World Heritage Site. Alhambra, due to its history, is a perfect example of Muslim art, set on a European background.

The Alcazar is a royal palace located in Seville, Spain that was developed by Moorish Muslim kings. It is considered one of the most beautiful structures in Spain, a perfect example of mudejar architecture of the Iberian Peninsula.

It is the oldest royal palace in Europe and still used by the royal family as an official residence. The Alcazar has been a UNESCO World Heritage Site since 1987.

Montserrat is a multi-peaked mountain in Barcelona, Catalonia, Spain. It has three peaks, namely the Saint Jeroni, Montgros and Miranda de les Agulles. The Caribbean island, called Montseeat, was named after this mountain by Christopher Columbus. The mountain consists of a pink conglomerate, which is another type of sedimentary rock.

The Benedictine Abbey, Santa Maria de Montserrat is located on this mountain. It is also a national park and the first one in Spain.

The Seville Cathedral is also known for its complete name to the Cathedral of Saint Mary of The See. It is the third-largest cathedral in the world. It was constructed in 1402 until 1506 and funds for the construction were from the clergy stipends during that time.

The Seville cathedral is where the Archbishop’s palace can be found. It is also where Christopher Columbus was buried. It is a UNESCO World Heritage Site since 1987.

Park Guell is a public park system located in the province of Barcelona, Spain. The park was designed by Antoni Gaudi, an architect popular for his Catalan modernism style. It was originally built as a commercial housing site but ended up unsuccessful.

It has now been converted into a municipal garden that is both peaceful and calm, as what a park should be. It has been a UNESCO World Heritage Site since 1984.

El Escorial is a historical residence of the king of Spain located in San Lorenzo de El Escorial. It functions as a monastery, royal palace, museum, and school. Together with Juan Bautista de Toledo, King Philip II designed El Escorial. About 500,000 tourists come to see the beautiful El Escorial every day.

It has been registered as one of UNESCO’s World Heritage Sites since November 2, 1984.

These places are just the top ten. Spain, for sure has more to offer, so make sure you get your tickets now. Enjoy beautiful Spain with family or friends, it is worth it.