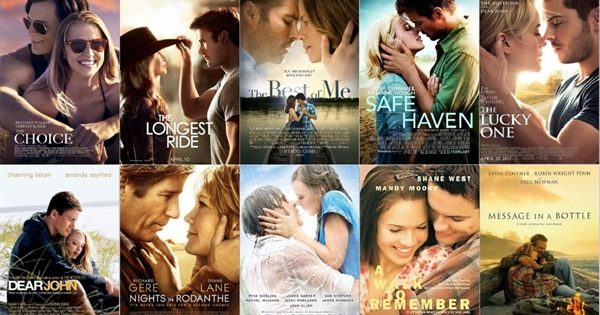 Romance novels made into movies always have a special something to it, especially if you have read the book. Although there is always a long debate on which one is better – the book or the movie? – being able to put a face and physical attributions to the character we so deeply adore can be freshening, and can make you fall in love with the novel all over again.

Many best-selling novels have already made it to the big screen. Just as they were best-selling as books, the movie has also hit the box office. With the hard work of the production team and the romantic story from the author, we are lucky enough to see these top 10 romance novels that were made into a movie. No spoilers here.

installment of the trilogy in 2015. The rich and powerful Mr. Grey; the young and vulnerable Anastasia; whip up a mind-boggling plot twist and you got yourself a best-seller.

Finally, the latest sensation that shattered the hearts of many – Me Before You, a novel by Jojo Moyes, follows the love story of young and cheerful Louisa Clark and short-tempered Will Traynor.

Will their love story go beyond life and death itself?

Despite the many criticisms (but also a lot more support), Fifty Shades of Grey written by E. L. James made it to the big screen with its first installment of the trilogy in 2015.

The rich and powerful Mr. Grey; the young and vulnerable Anastasia; whip up a mind-boggling plot twist and you got yourself a best-seller.

Another one by Nicholas Sparks (and he is really on a roll, this legend), The Notebook tells us the love of Noah and Allie back in 1940s South Carolina.

Their love tested through time, circumstance, and against all odds, Allie and Noah survived it all and taught us that true love is the strongest force on the planet.

4. The Fault in Our Stars

John Green has shattered the fictional world of many teens and adults with this heart-rending yet inspirational novel.

Released into a film in 2012, The Fault in Our Stars has made worldwide sensation because of how raw and realistic was the storyline.

This fictional novel written by Audrey Niffenengger was released into a film in 2009. It follows the story of a normal woman, with a not-so-normal love story and love interest.

Another movie adaptation from an original Nicholas Sparks novel, The Best of Me tells us of a love story between two adults who have long since lived their lives separately, due to certain social circumstances.

It showed us that love, despite the long absence of someone, can only grow fonder and never fades even through years and miles apart.

This love story series written by Stephenie Meyer gave a whole new light to the eternal conflict between vampires and werewolves.

Put a little twist to it, a love interest and love triangle – you got yourself a best-selling book series and box office movie hits that is awaited by both the young and the old all over the world.

8. Gone with the Wind

A classic movie that is set in the years of the Civil War, Gone with the Wind is written by Margaret Mitchell and has won many awards – both the novel and the film.

The story follows the life of Scarlett O’Hara and her love affairs with Rhett Butler and Ashley Wilkes. A true-blue southern love story that gives us a view of life during those years.

9. A Walk to Remember

A Walk to Remember is a 2002 film that is adapted from the novel written by Nicholas Sparks. It follows the young and budding love of two teenagers who are both from different origins in society.

The movie, although with a tragic end, inspired many of us of how strong love can be and how much odds it can beat when you fight for life and for love.

A recent novel by Nicholas Sparks which is also recently made into a film, The Longest Ride follows the intertwining love stories of two couples – young love and elderly love.

It shows us that love can be different in many ways, but the same in one important thing: how much you are willing to give to the person you love.

Whether you’re the “romantic film” type or not, there’s that certain pull to movies that have been based on novels. More than looking into the author’s romantic soul, you are given the treat to enjoy a story without the need to spend many hours reading the book. Although many would still argue that the book is better, it’s a matter of perspective and how much you enjoy the story.