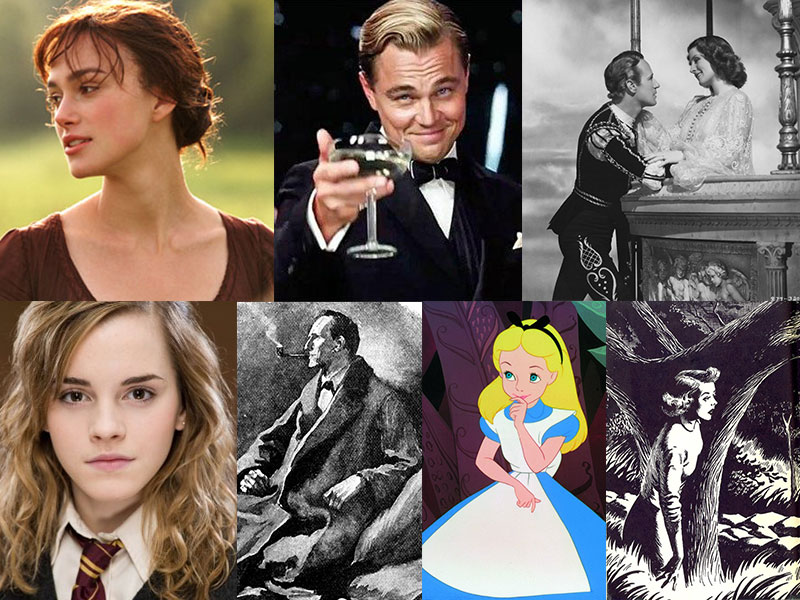 Book lovers out there can attest that ten of these characters have made you feel excited, giddy, happy, angry, disgusted and all other kinds of emotions, while reading them. They have, in one way, made us hungry for more books to read.

The well-loved Elizabeth Bennet is the main protagonist of Jane Austen’s novel Pride and Prejudice. She was often called Lizzy by her family, or Eliza on separate occasions. She is the most endearing and admirable among the heroines of Austen because of her intelligence, independent thinking, and vitality.

She is considered to be a most delightful creature ever to appear in print, according to its creator, Jane Austen herself.

Katie Scarlett O’Hara is the main character of Margaret Mitchell’s novel Gone with the Wind. The book was adapted in the film with the same title. She was born in Tara, which was her family’s plantation. She is famous for her 17-inch waist. She is also vain, self-centered, and spoiled but very intelligent.

When the Civil War swept away all her wealth, Scarlett toughened up in order for her and her family to survive. She was portrayed by the English actress Vivien Leigh, who won an Academy Award for playing the character.

Count Dracula is the main antagonist in Bram Stoker’s 1897 Gothic horror novel, Dracula. He is a century-old vampire.

It is believed that the character of Dracula was inspired by the Romanian general of the 15th century named, Vlad III the Impaler, who was also called Dracula at that time.

Dr. Hannibal Lecter is a fictional character of Thomas Harris’ novels like The Red Dragon, The Silence of the Lambs, Hannibal and Hannibal Rising. The books were adapted in film and the best portrayal was that of Anthony Hopkins’, “Lecter”. Hopkins won an Academy Award for his role.

Hannibal Lecter, according to the American Film Institute is the number one movie villain of all time.

The character of Sherlock Holmes was created by the British author, Sir Arthur Conan Boyle. Holmes is a consulting detective, known for his shrewdness. He is also good at disguises and for using forensic science to solve his cases.

His popularity has produced different adaptations of the character in different stories.

Harry Potter is the main fictional character of J.K. Rowling’s series of seven fantasy books. The books narrate the story of Harry Potter, the boy who lives in the cupboard under the stairs in number 4 Privet Drive, Little Winging, Surrey.

His parents were killed by Lord Voldemort when he was still a baby. From then on, he lived with the Dursleys, who were his closest relative. He had never known about his magical past because it was secretly kept from him.

Fitzwilliam Darcy, or better known as Mr. Darcy, is one of the main characters of Jane Austen’s famous novel, Pride and Prejudice. He was initially viewed as aloof, arrogant, and lacking in “gentleman-like manners”.

Upon re-evaluation of his actions, he changed to win Elizabeth Bennet’s heart. Mr. Darcy is viewed as a romantic hero up to this day.

Dumbledore’s full name is Albus Percival Wulfric Brian Dumbledore. He was the Transfiguration Professor, who later became the Headmaster of Hogwarts School of Witchcraft and Wizardry. He founded the Order of the Phoenix and led the resistance against Lord Voldemort. He held the Elder Wand until the moment he died.

Dumbledore was considered the greatest wizard to ever be in Hogwarts.

Gandalf is one of the fictional characters of J.R.R Tolkien’s “The Hobbit” and “The Lord of the Rings”. Gandalf is a wizard and a member of the Istari order. He is also a leader of the Fellowship of the Rings.

James “Jimmy” Gatsby is the title character of the book “The Great Gatsby”, written by F. Scott Fitzgerald. Gatsby is a man of around thirty, who rose from poverty into someone very wealthy. He was motivated to become rich because of his love for Daisy Buchanan, whom he met before going to fight in World War I.

After Daisy married a different man, Gatsby dedicated himself to acquiring a great fortune in order to win Daisy back.

These characters may be fictitious, but nobody can deny the impact they have made in our lives. Some may not be good, but it sure made us realize a lot of things. One is that the good always triumphs over evil.