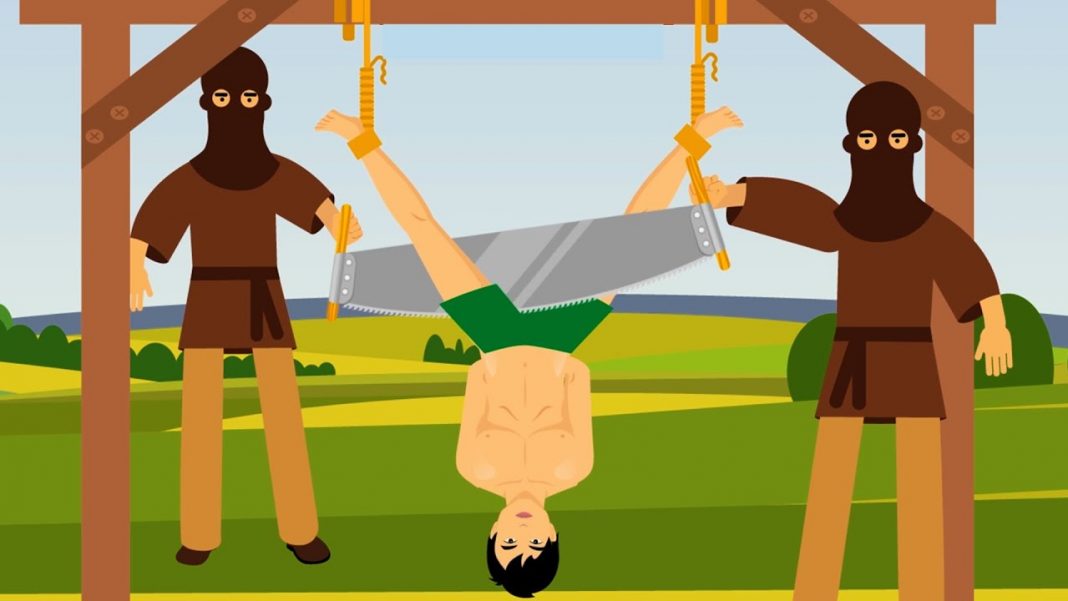 The first question that comes to mind when you hear things such as torture is, “How can anyone be so cruel?”. Yes, people in the past have been very brutal with their punishments and torture schemes. Find out which methods were the worst in the past.

The rat torture is a very painful method that was a feature of the Tower of London. The rats were placed in a pottery bowl, then positioned on top of the prisoner’s naked body.

As the hot charcoal is being piled on top of the bowl, the rats would burrow into the prisoner’s body to escape the intense heat, resulting in an excruciatingly painful death.

The Breast Ripper may also be called The Spider. It is a torture device made of iron with four claws, used primarily on women that were accused of adultery, heresy, blasphemy, and abortion.

The device is first heated and then clamped onto the breast to rip it out. Chunks of flesh would be torn or shredded from the body. The torture is usually done in front of the woman’s children.

The Breaking Wheel or the Catherine Wheel was a popular torture device. It looks like a large wagon wheel where the prisoner was spread-eagle.

The gaps on the wheel allow the limbs to break and  It was used as capital punishment, which involves bludgeoning the prisoner to death after breaking all of its bones.

4. The Chair of Torture

The Chair of Torture or also known as the Iron Chair of Torture has been used in different countries for several centuries. The prisoner was seated on strips or plates of brass, which was set over an open flame to be heated and roasted alive.

Another way this device was used was to put the prisoner nearer and nearer an open and blazing fire. The other version of the Iron Chair was made of thousands of spikes lining the back, armrest, seat, and leg rest.

The Rack torture device consists of a rectangular wooden frame that is slightly raised from the ground, with rollers on both ends. Through a handle and ratchet mechanism, the rollers at the top increase the tension on the chains.

The levers and pulley mechanism allows the rollers to rotate, causing the dislocation of the joints of the prisoner, which is excruciatingly painful. Loud popping noises would be heard as a result of snapping cartilage, ligaments, or bones.

The Judas Cradle was also known as the Judas Cradle or Guided Cradle, which places the victim on a waist harness on top of a pyramid-shaped seat. The point of the pyramid is placed inside the anus or vagina, which was gradually lowered by ropes.

Intense pressure and stretching were put in the anus or vagina, causing them to tear. Certain infections can result from such tears, which often led to death.

The Brazen bull was used as a torture and execution device. The bull was made of bronze with a door on one side and hollow in the inside. The criminal was placed and locked inside the bull, where a fire was set under it.

This results in the criminal gradually being roasted alive. The bull was also made with an acoustic apparatus wherein the screams of the criminal are converted into the sound, a bull makes.

Impalement was a form of an execution and torture device, where a victim is penetrated by a stake, pole, spear, or hook, which perforated the torso.

This particular device was used to punish crimes against the state, to suppress rebellion, as punishment for traitors, among many others.

To be hanged, drawn, and quartered during the 1300s was a form of statutory penalty for those who committed high treason. The criminal was fastened to a hurdle and drawn by horses. As he reaches the place of execution, they will be hanged to the point of death.

Then, they will be emasculated, disemboweled, beheaded, and chopped into four parts. Their remains were often displayed on the London Bridge. As for women who were convicted of high treason, to be burned at the stake was their punishment.

Death by sawing was a form of execution practiced in different parts of the world. The torture was done by hanging the victim upside down and sawing him in half, while still alive, transversely or sagitally, usually from the groin going upwards or from the skull going downwards.

The reason for the upside-down hanging is to allow the blood to rush to the head, making them stay conscious while being tortured.

Surely, these inhumane methods were painful and have caused great suffering to the condemned. Thankfully, some of these were mostly abolished at the turn of the 19th century.