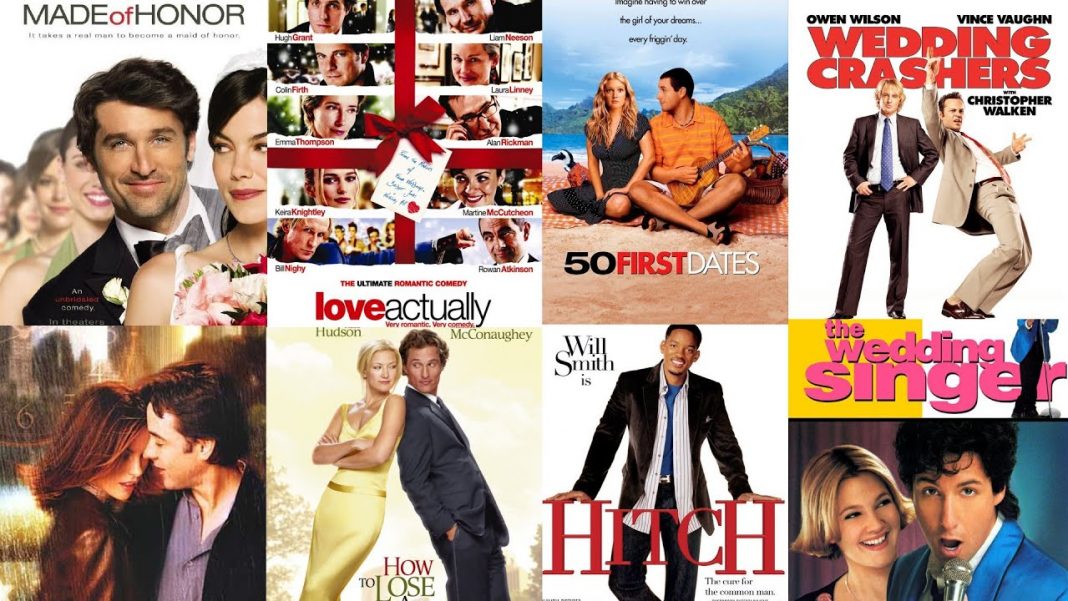 There are plenty of suckers for romantic–comedy movies out there. What makes them tick are the plots that are worth watching over and over again. Rom-Com movies are never boring when you know you can laugh and fall in love at the same time.

1. There’s Something About Mary

This comedy film was directed by the Farelly brothers, Bobby and Peter in 1998. It stars Ben Stiller as Ted Stroehmann and Cameron Diaz as Mary Jensen. Ted landed a prom date with his dream girl Mary., but the joy was short-lived due to a zipper accident, which landed him in the hospital. He lost contact with Mary since then.

Years after, Ted is still in love with Mary and so he hires a detective to track her down. It is where everything became topsy-turvy but later wins her love.

It stars Adam Sandler as Henry and Drew Barrymore as Lucy, the girl with the short-term memory loss due to an accident that happened years ago. She does not remember a thing after that accident.

So every day, Henry has to court her and make her fall in love with him. He also has to convince his family that his feelings are real.

Andy Stitzer, a 40-year old single guy who works for a big box store. He plays video games during his free time and has an action-figure collection. At 40, Andy has never had sex, so his friends urge him to lose his virginity.

Then, Andy meets a local shop owner Trish with whom he’s attracted and pursued a friendship that blossomed into a romance.

At 32, Bridget started a diary and write about her attempts at changing and losing weight, binge-eating, smoking, and drinking. When Bridget Jones went home for Christmas at her parent’s house, she encounters the son of a family friend, Mark Darcy. He was snubbed by Mark and later falls for his boss Daniel instead.

She finds out she has been two-timed by Daniel and ended the relationship, only to be reunited with Mark, who has expressed genuine affection for her.

Andi Anderson, a writer for Composure magazine, was given the task to write the article “How To Lose A Guy In 10 Days”. Benjamin Barry, an advertising executive, made a bet that he can make any woman fall in love with him, to win a very important ad campaign.

The two met in a bar after the bet was made. With their own goals to accomplish, they never found a more challenging ordeal.

Hitch, the “ date doctor” teaches men how to court women. That is how he earns a living. His latest client was Albert Brennaman, who falls for a celebrity client Allegra Cole. While helping Albert out, Hitch finds himself falling in love too with Sara Miles, who is a gossip columnist.

But she remains unimpressed with his methods. After resolving a misunderstanding, the two finally resumed their relationship.

To save herself from being deported to Canada, Margaret Tate, a successful book editor decided to make Andrew Paxton, his assistant as her fiance. Andrew agrees because of his dream of becoming an editor himself.

He brought Margaret to Alaska to meet his rich and eccentric family, only to fall in love with each other for real.

Tom, a poor and average guy falls in love with the spoiled daughter of a business tycoon, Sarah. Despite her family’s objections, he marries her. They honeymooned in Europe, which was a trip Tom could never afford. Peter, who was Sarah’s ex-boyfriend catches up with them in Europe to break the two lovebirds apart.

Their love gets tested, but finds that it conquers all every time.

Oliver and Amanda met on an airplane and instantly had chemistry. But they both agreed that they are not meant for each other, so they went on their separate ways. But fate has a way of bringing the two together to form a friendship for years to come. As one wants more from their friendship, the other one seems to be within a relationship.

But when the perfect time came, they finally realized that they are truly meant for each other.

Julianne Potter’s friendship with Michael O’Neil dates back to when they were still kids. They made a pact to marry each other if they were still single at the age of 28. Four days before Julianne turns 28, she finds out that Michael is getting married to a beautiful 20-year-old named, Kimberly. She soon realizes that she’s in love with her best friend tries to stop the wedding before it’s too late.

It’s not a happy ending for her, but it’s a story that teaches how to deal with loss and regret.

These stories are so popular because so many people can relate to the same situations. When you finally find your perfect love story, never forget that you once made each other laugh. So, love and laugh as often as you can.