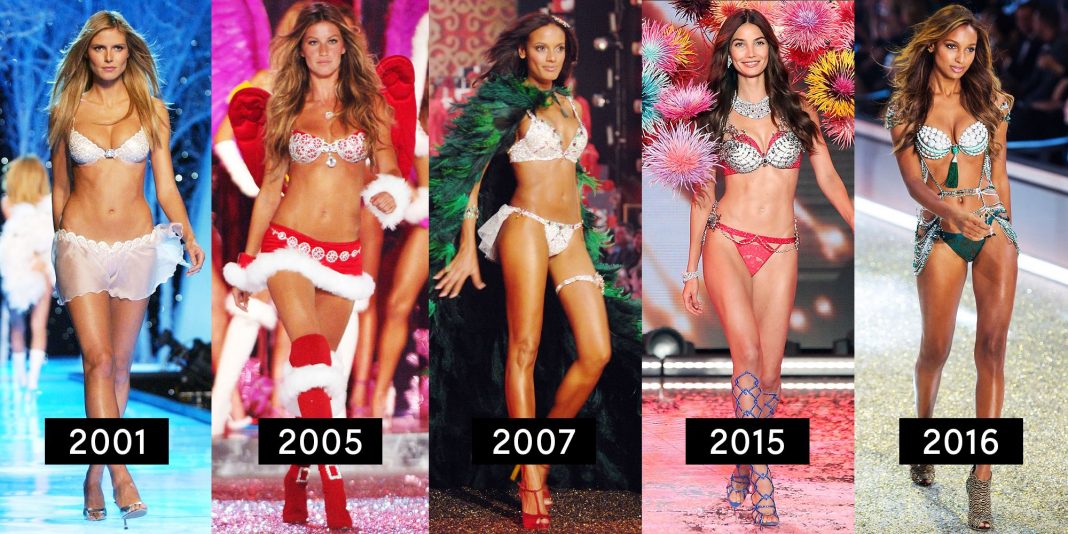 Known as the sexiest night on the planet, every year we are treated into a night of sexy, elegant, and first-class lingerie that is brought to us by the one and only Victoria’s Secret. We’re talking about the Victoria’s Secret Fashion Show and the year-over-year amazing improvements that they present in their showcase. It’s one of those fashion shows that both men and women look forward to watching.

One of the most awaited parts of each VS Fashion Show, and is considered to be the “star of the show”, is the Fantasy Bra collection. Not only is this lingerie the most beautiful of the night because of its intricate and elegant design, but it is also the most expensive. Materials used are diamonds, pearls, rubies, and many other types of gems that are collected from all parts of the world – the Fantasy Bra is “The Bra”.

Here are the top 10 Victoria’s Secret Fantasy Bra over the years.

The most expensive and record-holding fantasy bra introduced by Victoria’s Secret thus far is the Red Hot Fantasy Bra.

Worth $15 million, the 2000 Victoria’s Secret Fashion Show was blazed by no other than Gisele Bündchen once again.

Sauntering and donning the $15 million Red Hot Fantasy Bra in all its elegance and glory. Made of red satin, this lingerie is made of 1,300 precious gemstones and 300 carats of Thai rubies.

Red and very “Christmas-y”, the Sexy Splendor Fantasy Bra worth $2.5 million was flaunted in the 2005 VS Fashion Show and worn by Victoria’s Secret Angel legend Gisele Bündchen.

Sexy is an understatement to this Christmas-themed lingerie. It is comprised of 2,900 pave set diamonds, a 101 karat diamond, 22 ruby precious gemstones, and 18-carat white gold.

Matching her personality and elegance, Heidi Klum’s fantasy bra is made of 1,200 Sri Lankan pink sapphires and a 90-carat emerald cut diamond gem.

“The Royal” as it was aptly nicknamed, is made of 4,200 precious gems that were collected from around the world, which includes diamonds, rubies, and yellow sapphires.

Angel Karolina Kurkova, with her angel wings and her angel face, walked the VS Fashion Show catwalk of 2006 wearing the $6.5 million fantasy bra.

Hearts On Fire Diamond Fantasy Bra is made of 2,000 diamonds and a 10-carat diamond brooch centerpiece.

Tough and foxy vixen Adriana Lima, a favorite among the Victoria’s Secret Angels, wore the stunning Black Diamond Fantasy Miracle Bra in the 2008 VS Fashion Show.

Selita Ebanks gave a festive and holiday vibe in the 2007 Victoria’s Secret Fashion Show when she wore the Holiday Fantasy Bra, which was worth $4.5 million.

Marisa Miller personified the elegance in black lingerie with the Harlequin Fantasy Bra which she wore to the 2009 Victoria’s Secret Fashion Show.

This $3 million fantasy bra consisted of 2,300 diamonds crossing around the cups and joined together by a 16-carat heart-shaped pendant in the shape of a heart at the center.

Alessandra Ambrosio, a crowd favorite for Victoria’s Secret Fashion Show followers, has finally got her shining moment when she first wore the Floral Fantasy Bra – the 2012 fantasy bra of VS. Perfect for her colorful and sophisticated self.

The fantasy bra is composed of 5,200 precious gemstones; among them are sapphires, amethysts, rubies, and a 20-carat diamond centerpiece.

Miranda Kerr left a trail of broken hearts with the 2011 fantasy bra named aptly as Fantasy Treasure Bra. The angelic-faced model walked the catwalk to the tune of Maroon 5’s “Moves Like Jagger”.

Wearing a bra with 3,400 precious gems, including yellow and white diamonds, pearls, and aquamarines, and 18-karat white and yellow gold.

For a Victoria’s Secret Angel, it is a great honor to wear the fantasy bra and flaunt it in the catwalk. It is one of the highest honors and most aimed assignment by every VS Angel. Who would not love it? You don’t always get to wear underwear that is worth millions, much less the sexiest ones.