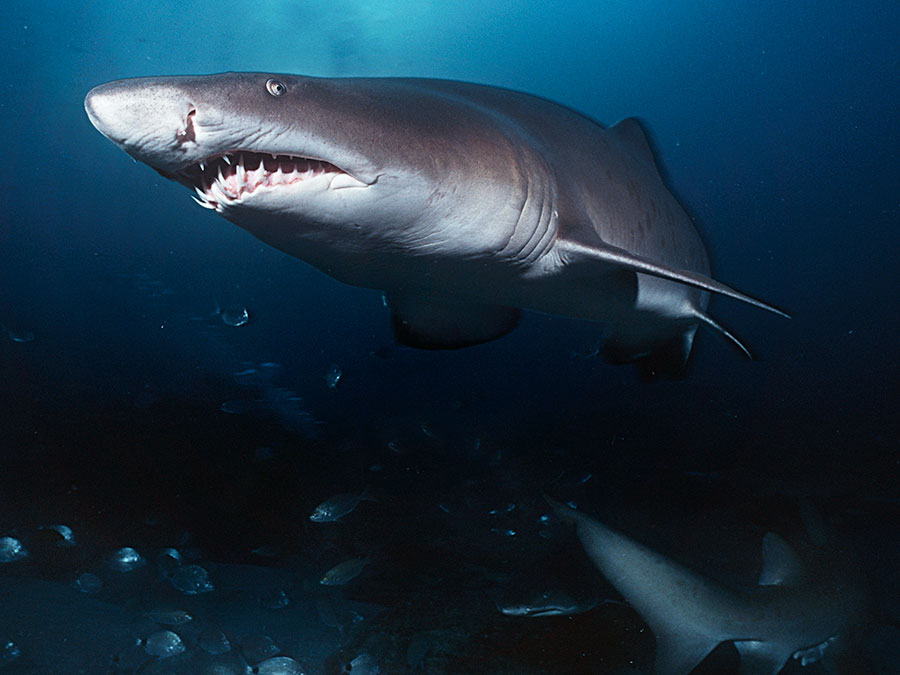 The shark is a very fascinating animal with a fierce reputation. Its size ranges from ten inches to 50 feet. Keep reading to expand your knowledge about sharks with our top ten facts.

There are about four hundred species of sharks known so far. These species vary in size, shape, and color. The whale shark is the largest shark in the world reaching a maximum of 59 feet.

The smallest is the dwarf lantern shark measuring about 6-8 inches in length.

Sharks are considered as cartilaginous fish. This means that their body structure is made up of cartilages instead of bones.

Because of this, their fins cannot fold against the body or change shape.

Sharks have about 5 to 15 rows of teeth in each of their jaws. Since the teeth do not have roots, they fall out after a week.

However, the new teeth come in their place in a day or two.

The lateral line system is a network of canals filled with fluids, under the skin. Sharks use this to detect water movements. Due to the pressure of the waves in the ocean water, the liquid vibrates and gets transmitted to the jelly in the system. This in turn transfers to its nerve endings signalling a message to its brain about the water movement.

Not only this, but the system also helps them find their prey and move around other objects during the night when visibility is very poor.

Their sleep pattern is more of a ‘sleep swimming.’ To get the required oxygen during sleep, they constantly keep water moving on their gills. However, only a few sharks behave in this way.

Others have spiracle that is like a small opening behind its eyes to force water across its gills. This feature helps them to rest by remaining still.

Different species of sharks have different reproduction. Some lay eggs while others give birth to the young ones. But all of them reproduce through internal fertilization. Even more interesting is the fact that some of the species have placenta like humans but not all.

In such cases, the baby gets nutrition from the yolk sac or the unfertilized egg capsules with the yolk.

A lot of people believe that sharks are vicious man-eaters. But, this is a total misconception.

Only ten species of this animal are dangerous to humans. So, we must treat them with respect.

These are nothing but small plates that are covered with enamel.

Since their bodies are very heavy, they need to keep moving to avoid sinking.

One good meal is enough to satisfy shark’s hunger. After eating, it can stay without food for three to four months.

This is because it uses very little of its energy for swimming.

Top 10 Lessons Learned From How I Met Your Mother