Top 10 Hygiene Practices of the Past 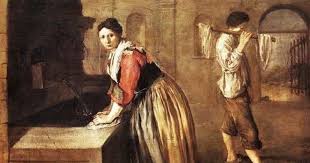 Hygienic practices in the past may seem taboo to most of us now, but it was the only way they knew how to stay clean, themselves. These practices have become better and better as the years passed, thanks to the ingenuity of the modern inventors, who have introduced better soaps, toothbrushes, toothpaste, and deodorants to stay and smell clean. Do you wonder how they did it? Here are the top 10 practices people used to do.

People coming from a modest household would usually have just four sets of clothes to change from time to time. These clothes were also stinky because of the lack of washing as these may only be washed once a week, or not even then.

The people of the nobility may have a bigger set of wardrobe to change with depending on different occasions. But these, too, were rarely washed as well.

The powdered wigs or perukes were used in the past to cover up the symptoms of venereal disease, syphilis, which was rampant during the 1500s. The disease resulted to open sores, rashes, blindness, dementia, and patchy hair loss. So, for an era that values long hair as a status symbol, baldness was simply a source of embarrassment.

So, the people of the nobility wore powdered wigs instead to cover-up the flaw. But, these wigs were usually infested with lice. The wig was then sent to the wig-maker and have the wig boiled to remove all the nits.

Bathing was a luxury in the past because not many can have the opportunity to do it every day. The reason behind infrequent baths was the lack of running water in a home. The water was mostly carried from the lakes and rivers that were a bit far, so it was a difficult chore to actually carry buckets of it back to the house.

Not to mention, boiling it to provide a nice warm bath. Also, baths were only taken when there was a need for it like an illness or lice infestation.

Bedpans were used for nighttime bathroom breaks. All they needed to do was slide it out from under the bed and after they are done, they slide it right back under it.

In the morning, they would simply throw the contents out of the window, simply because they were no proper toilets or waste disposal in the past. So, it is better to avoid windows in the morning.

Some kings of the past used to have a “Groom of Stool”, which carries a portable toilet and cleaning tools of the king. This position was usually held by the sons of noblemen and was, in fact, a much-coveted position.

Doing the laundry during the 18th century was quite a difficult task because of the lack of a running water pipe. The water was mostly sourced from rivers, lakes, and wells, and these are not so nearby. Laundry time was dreaded by maids simply because there was so much to clean.

Clothes, especially undershirts and underwear were mostly dirty since people only change them once a week. The clothes were also washed with lye soap, which severely irritates the hands of the laundresses.

Handwashing among the commoners of the previous century simply did not practice handwashing. People then did not have an inkling as to what germs and bacteria are. Diseases during those times were rampant due to the absence of this important practice.

Royalty and other nobility, however, did have an opportunity to wash their hands in the comfort of their own homes, with a basin of water already waiting for them to use.

Dumping grounds for human waste products were practically everywhere during those ancient times. The most common dumping ground was the streets where human and animal feces, together with rotten food and dead animals can be found.

There was also no street cleaning system, that is why it stunk horribly and many diseases were prevalent.

The ancient Chinese used toothbrushes with bristles made from the neck of a cold climate pig. Modern French dentists suggested the use of modern toothbrushes and toothpaste were then developed.

They made toothpaste by adding soap and some even had chalk mixed with it.

Deodorant was non-existent in the past. People from simpler households or commoners were simply foul-smelling.

Royalty or those with higher statuses, on the other hand, made use of flowers and scented oils to smell a little better or hide their own stench.

Gone were the times when the streets were used as dumping ground for feces. Thanks to the development of the modern sewage system, the streets are once again safe and clean, and to all the other inventions. Let’s just be thankful for the brains behind the comfort and sanitation, we are now experiencing.