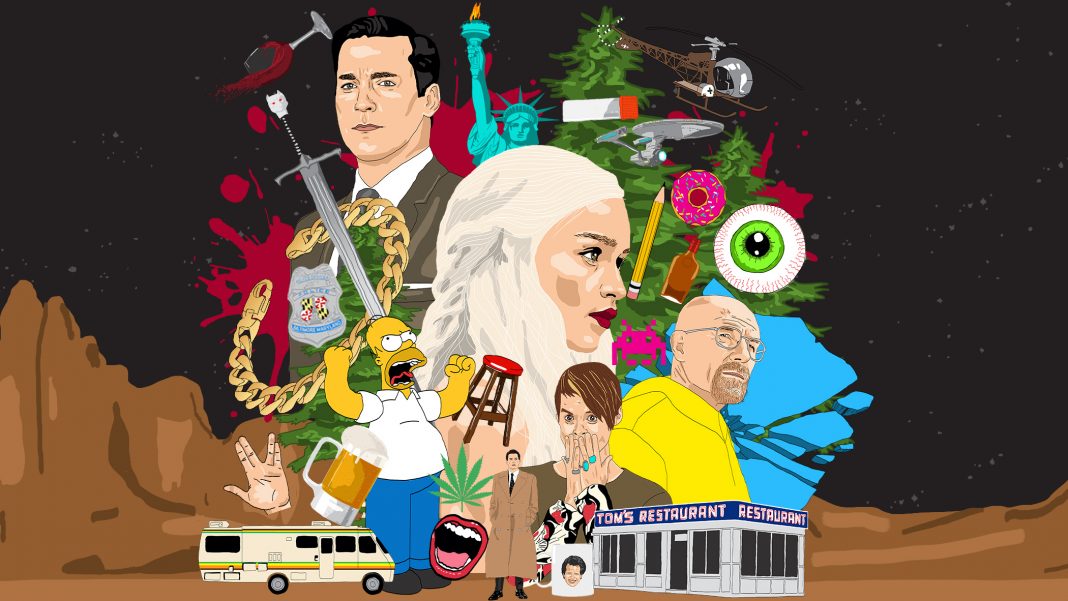 You hurry home from work and go straight to turning on the television because your favorite show is about to air. While your eyes are glued to the screen, you make dinner, take off your clothes and change into something more comfortable. Seriously, TV shows are like chocolates! They are so addictive! Find out which of your favorite shows made it to the top ten.

Star Trek is an American TV series created by Gene Rodenberry. It is about the adventures of the starship USS Enterprise and its crew in the Milky Way galaxy during the 2260s. The ship was led by Captain James T. Kirk, first officer, and science officer Spock, and the medical officer Leonard McCoy.

It has made a great impact on pop culture and has even led to the invention of the cellular phone. It is considered one of the best science fiction shows ever.

Friends is an American television sitcom created by Marta Kauffman and David Crane. The cast consists of Jennifer Aniston, David Schwimmer, Courteney Cox, Matthew Perry, Matt LeBlanc, and Lisa Kudrow. It gained positive reviews and became one of the biggest sitcoms of all time.

The story revolves around these six friends on their funny and romantic escapades and their careers. The well-loved show lasted 10 seasons.

Band of Brothers is an American war drama television series that is based on the book with the same name authored by the historian Stephen E. Ambrose. It tells the history of the Easy Company veterans, as all of the characters in the miniseries are based on some of them.

The show aired ten episodes, all featured the company’s exploits during the war in full detail. The men’s identities were never revealed up to the end of the series.

An American sitcom created by Larry David and Jerry Seinfeld. It ran for a total of 9 seasons and was named the greatest tv program of all time by TV Guide. The show features a fictional Jerry Seinfeld in Manhattan, surrounded by friends and other acquaintances.

The cast was George Costanza as Jerry’s best friend, Elaine Benes as his ex-girlfriend, and Cosmo Kramer who just lives across the hall. It won many awards during its time.

It was created as a spin-off of the show Cheers and was considered a successful one.

Each season revolves around the 24 hours in Jack Bauer’s life, trying to takedown terrorist threats and attacks. It became the longest-running espionage television drama ever to come on screen.

An American drama series created by Jeffery Lieber, J. J. Abrams and Damon Lindelof. It aired six seasons, with a total of 121 episodes. The story centered on the survivors of a plane crash trying to survive on a mysterious tropical island.

The show has been constantly ranked part of the top ten television series.

The Office is an American comedy television series created by Greg Daniels as an adaptation of the former series of the same title. The show was all about the lives of the individual office employees of the Dunder Mifflin Paper Company. It was filmed with a single camera set-up for a more documentary look and feel.

The cast was Steve Carell, Rainn Wilson, John Krasinski, Jenna Fischer, B. J. Novak, Ed Helms, and James Spader. The show has been one of the most critically acclaimed shows, too.

The Simpsons is an animated comedy series created by Matt Groening. It is a satire of a middle-class family, that is the dysfunctional Simpson family, and mocks American society, and culture.

Game of Thrones is an American fantasy drama created by HBO with producers, David Benioff and D. B. Weiss. It was made as an adaptation of the fantasy books authored by George R. R. Martin. It is set on Westeros and Essos which are fictional continents and consist of broad and complex characters.

The story is tinged with intrigues, betrayals, gore, and more. The show has become one of the most-watched television shows second to the Sopranos.

These shows have become great and one of the best for the great plot, superb writing, and interesting characters. It takes a really good show to stay on the air for more than one season and these shows have proven that they are worth all the late-nights and all the time in the world. So, enjoy these shows while they last.