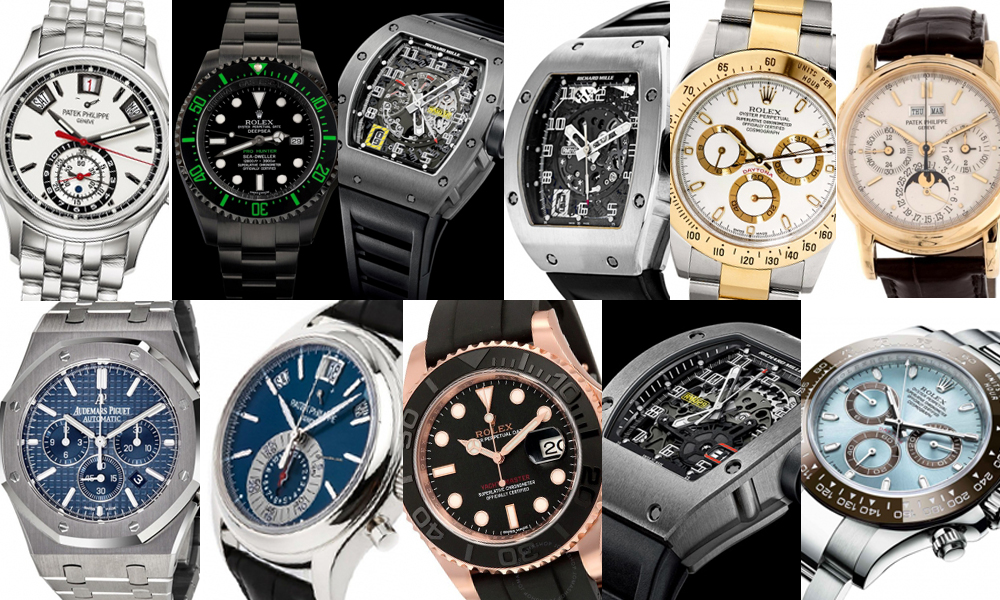 There are cheap watches and there are the ones you can’t afford to buy at all because they are just too expensive. But, regardless of the price, they are all very essential in accurately telling time. So, here are the top ten luxury watch brands in the world.

Louis Vuitton is a French fashion house, opened by Louis Vuitton himself, in 1854. It specializes in luxury trunks and leather goods, watches, jewelry, shoes, accessories, and even books. All of its products have the famed LV monogram, to ensure their authenticity.

The Louis Vuitton brand was considered to be the world’s most valuable luxury brand. Having this title, it is also the most counterfeited brand in the world.

Louis Moinet is famous for inventing the chronograph. He was born in Bourges, France to a well-off family of farmers. He was introduced to watchmaking at a very early age and learned the complexities of watch making with a master-watchmaker.

When he was of age, he reestablished a connection between the same master watchmaker, and their roles were reversed. Soon, the teacher became the student and vice versa.

Longines is a watch company based in Switzerland. It was founded by Auguste Agassiz in the year 1832 and is owned by the Swatch Group. The brand Longines is popular for their aviator watches, designed to help with air navigation. Timers used during the Olympics in 1896 was provided by Longines.

Another historical event concerning the Longines watches was when explorer Louis Amedee de Savoie went to the North pole with a Longines watch too. Presently, Longines markets, sports watches, and chronographs.

Harry Winston is a subsidiary of the Swatch Group and is well known for its diamonds and luxury timepieces. It was the first jeweler to loan diamonds to an actress for the Academy Awards.

The actress was Jennifer Jones and the company became popular with other celebrities after that. The company has headquarters located in New York City.

Hermes is a French manufacturer of luxury bags, leather, accessories, perfumes, and ready-to-wear, established in 1837. Its famous logo is of a Duc carriage with a horse. It began as a regular saddle shop in Paris in 1837. In the 1950 and 60s, the brand started to produce men’s watches, women’s watches, and jewelry.

The designs are always trendy yet classic, suitable for everyday wear. Hermes timepieces are a great investment for you can wear them anytime, anywhere.

Franck Muller is considered to be the master-watchmaker. He was born on July 11, 1958. He has undergone three years of training at the School of Watchmaking in Geneva. He worked under the tutelage of the famous watchmaker Svend Andersen.

In 1991, Muller together with Vartan Sir makes, established their own business as well and founded Technowatch SA. His watches were dubbed “the most complicated wristwatches in the world”.

Louis-Ulysse Chopard was a master craftsman in Sonvilier, Switzerland. His pocket watches were popular for their precision and reliability, so it gained major popularity among enthusiasts.

Karl Scheufele acquired the company in 1963 and it became one of the most popular watch manufacturers in the world.

Louis Francois Cartier took over his master’s shop Adolphe Picard in 1837. . Other than luxury timepieces, Cartier is also the only one that produces platinum jewelry. He also introduced wristwatches and pendulum clocks, which were unusual at that time since the trend was to carry pocket watches only.

Since then, his design ideas have become classic timepieces, which has surpassed countless trends and fashions

The brand developed the Navitimer, which has become a favorite among pilots and has helped many of them all over the world.

The sole purpose of the watch is to tell time. So, no matter the price and however cheap it is, as long as it tells the time accurately, it’s perfect. As for luxury timepieces, leave it to those who can actually afford them.