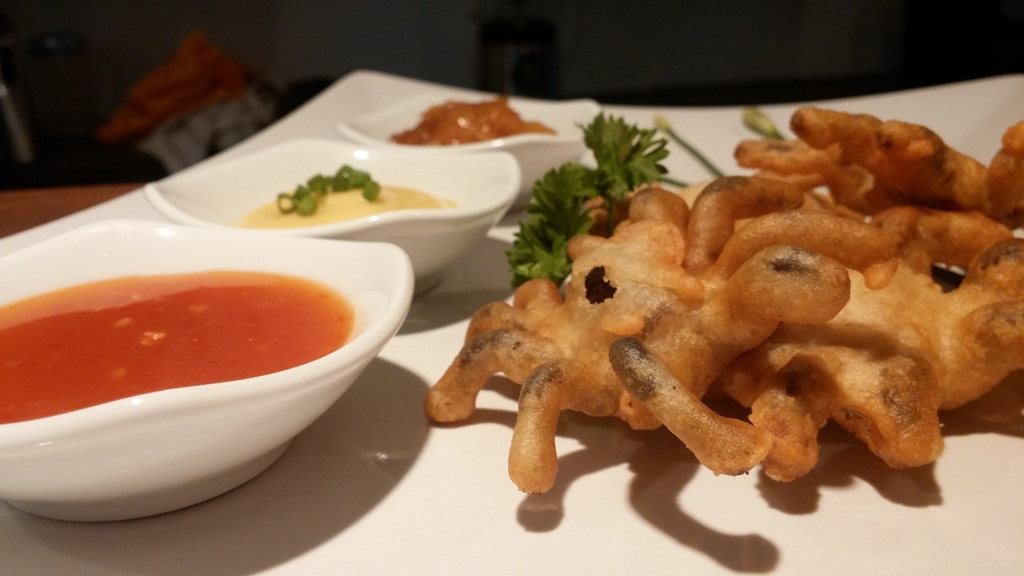 The most delicious food can sometimes be a combination of such weird ingredients that you might find them inedible at first. Surprisingly enough, this food tastes great. The only problem is that great-tasting food always comes with a price, and that is the health risks involved. That is why, as much as these delicacies are so good enough to eat, you better think twice before you do.

Deep-fried butter is a snack that is made with plain butter coated with some batter or breadcrumbs. It is then deep-fried until the crust turns golden brown.

It was invented by Abel Gonzales, Jr. Of Dallas, Texas, and was awarded “the most creative food prize” at the state fair of Texas in 2009. The flavor is very similar to that of French toast. Other variations have been made ever since.

The deep-fried cheeseburger is as simple as coating it in Panko bread crumbs, fry it in very hot oil, then skewer it and put some tasty sauces on top and it is done.

Others find it absolutely delicious while some find it utterly horrendous because of the health risks associated with it such as stroke, weight gain, diabetes, which makes you think twice before digging in.

Deep-fried cola is a cola-flavored batter that is deep-fried in very hot oil until golden brown and chewy and then topped with cola syrup, whipped cream, cinnamon sugar, and a cherry on top.

Since then, a different variation of the recipe has been made with other flavored sodas and topped with different toppings too. This was an invention by Abel Gonzales, Jr., who also invented the deep-fried butter.

It is best to use fresh potatoes and fresh ingredients for your batter too for a tastier meal.

The Krispy Kreme original sugar-glazed doughnuts are used as the buns for the cheeseburger and toppings of your choice are placed in between to create that mouth-watering cheeseburger.

The best combination according to reviews is to try it with some bacon, burger, cheese, and doughnut only.

The inventor of the deep fried cola and deep fried butter has come up with another creative food invention, the fried beer. To make one, first make a ravioli pocket with a dough similar to a pretzel. Fill the pockets with beer and close it around the edges.

Deep fry the ravioli until it is golden brown around 20 minutes. Those who have tried it has loved it since then. It is the most creative ravioli ever.

The deep fried chocolate-coverd bacon treat is made by simply wrapping some strips of bacon over a chocolate bar, others use the Snickers bar. It is then dumped into a batter and deep-fried until golden brown. After it has been cooked, the combination is dusted off with some powdered sugar and chocolate sauce.

This recipe has about 2,334 calories, which makes it a very unhealthy treat.

This is made by getting a S’mores Pop Tart well coated in some batter. Then roll this combination on Reese’s Peanut butter chocolate cereal for deep frying. Wait until it becomes golden brown. Top it off with some cream, chocolate syrup and sprinkles if you want some extra crunch and texture.

It may not seem so healthy but this combination is the perfect dessert to end the day.

To make this recipe, the worms need to be thoroughly cleansed by submerging it in water to get rid of the dirt. Then they have to be boiled to get rid of the mucus. It can be done repeatedly until the water becomes clear.

When it does, dip the earthworms in batter and deep fry until golden brown. Other recipes for earthworms include roasting and even baking them.

The fried tarantula is a delicacy in Cambodia and is quuite popular among the tourists. It is sold on the streets of Skuon and Phnom Penh. The spiders are rolled into some mixture of MSG, sugar, salt and some crushed garlic. Then deep fried into some very hot oil until the legs become stiff.

Some enjoy its crispy exterior and its soft center. Others, who find exotic food exciting, may find these delicacy enticing to eat but it is best not to try this one.

Sometimes, the best food can be the worst food. Just look for other alternatives t these recipes, so you can enjoy some great-tasting recipes without the health risks involved.